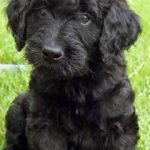 The Labradoodle breed is thought to have began in 1988 in Australia. Since then, the demand for this breed has led to their appearance all over the world. Ranging from light cream to dark black in color, there is a Labradoodle that will appeal to every future owner. Due to Labradoodles being a mix breed dog, one parent being a Labrador and the other a Poodle, each new puppy … END_OF_DOCUMENT_TOKEN_TO_BE_REPLACED