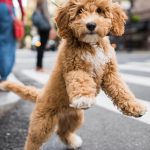 The mini Labradoodle is a smaller version of the well-known standard doodle. Miniature Labradoodles are a designer dog with one Labrador Retriever parent and one Miniature Poodle parent. The miniature Labradoodle, often referred to as mini-doodles are becoming increasingly sought after by prospective owners. Due to their adorable personality and miniature sizing it is no … END_OF_DOCUMENT_TOKEN_TO_BE_REPLACED